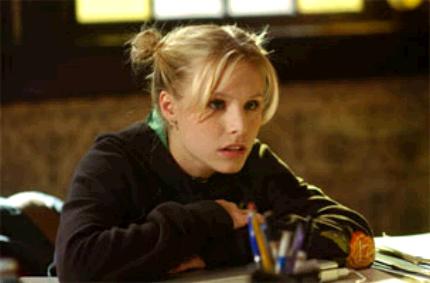 Yeah, yeah, I know… there are a big number of readers here who have probably never even seen an episode of VERONICA MARS, and you’re all wondering when the regular blog posts start back up. I mean, wasn’t there some 80’s toy line that got optioned into a script today?

Seriously though, here’s all the news you probably already got somewhere else by now:

Sean Connery will NOT be appearing in Indy 4. Bummer.

The Speed Racer site is up and running!

Judd Apatow is being sued by someone who claims he stole the story for KNOCKED UP. We ain’t buying it. For a second.

CBR continues their weekly coverage of the big X-events.

Neil Gaiman is giving us a bit more DEATH confirmation. Puts a smile on the face.

AND… Chud’s got some interview snippets with Mr. Gaiman on the subject.

Continuing with all things Gaiman, three STARDUST TV spots are up over at the movie site. Click ‘Video’.

Matt Damon and Paul Greengrass are re-teaming on IMPERIAL LIFE IN THE EMERALD CITY. Sounds interesting.

This one will get people talking: WB is adpating Orson Scott Card’s EMPIRE.

Newsarama’s got some clips with FF2 writer Don Payne.

Is my favorite comic book company from when I was a kid, coming back? Valiant apparently returns, but sans MAGNUS, TUROK, and SOLAR. Not sure how to feel.